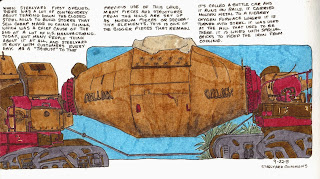 This is an old bottle car from the days of the steelyard, before Steelyard Commons shopping center.  I draw down there on occassion, because there's a lot of these types of things down there, and it's very close to where I live.  So, I can pop down there whenever I have just a little bit of time.  I also find there is a wide variety of things to sketch.

As I wrote in the journal page, there was a lot of controversy when they'd built Steelyard Commons, with it's Wal-mart, Home Depot, Target, Old Navy, and such.  This piece of land was the home to steel manufacturing that had closed down over the years.  People were upset, because essentially, stores that sold cheap foreign made items were moving onto land where people had lost their jobs in large part to cheap foreign made items.

Now, you hardly know that there was a controversy.  People are down there shopping all of the time.
Posted by Maureen at 5:58 AM