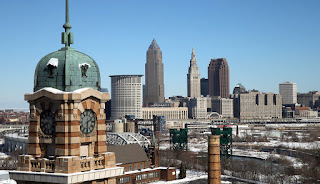 Join us to sketch awesome views of Cleveland on the top floor of the Crop Restaurant/Penzeys Spices Building on the SW corner of Lorain and W.25th St. We'll meet at the back entrance of the building off the parking lot. You can park in the lot behind the building accessed off of W. 26th, although their may be a charge. Please be there promptly at 1:30, as we need to be escorted upstairs.

Save the date for future events: We meet on the 4th or 5th Sunday of the month 1:30 to 4:00pm. All are welcome. Check out the Worldwide Group at urbansketchers.org 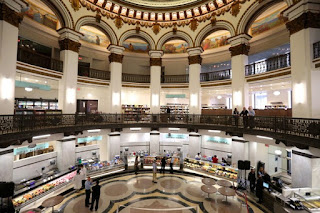 Join us to sketch Heinen's Downtown. We'll meet in the Balcony Bar area at Heinen's. Great overlook of the action. The former Cleveland Trust Rotunda Bank was converted into a grocery store, bar and coffee shop with bistro style dining and reopened in 2015.

Here's more history:
On the Corner of East 9th street and Euclid Avenue sits the historic Cleveland Trust Rotunda Building, a shining example of early 20th-century grandeur giving us a glimpse into Cleveland’s historic past and current home to Heinen’s Grocery Store.

Renowned architect George B. Post was commissioned to design the building that would become the home of the Cleveland Trust Company and eventually one of the most recognizable and iconic buildings in Cleveland.

In 1908 the Cleveland Trust Company building officially opened its doors to the public, just two years after construction had begun. The Cleveland Trust Co., or AmeriTrust as they were later known, occupied the space until merging with Society Corp. in the early 1990s.

Beginning in early 2015, this architectural masterpiece has served as the Downtown Cleveland home to Heinen’s Grocery Store, Cleveland’s oldest family-owned grocer and is open to the public once again. Led by John Williams of Cleveland's Process Creative Studios, this iconic structure has been carefully renovated and restored to its original beauty.

Save the date for future events: We meet on the 4th or 5th Sunday of the month 1:30 to 4:00pm. All are welcome. Check out the Worldwide Group at urbansketchers.org