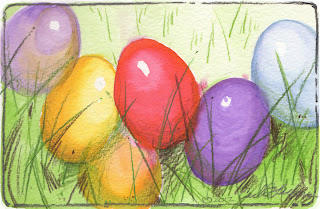 Unbelievable what people do with egg shells. Here's a view from the ground.
Posted by Carla Blackman at 11:24 AM No comments:

Unfortunately, this event has be canceled.  Please watch for information on the upcoming Historic Kirkland Village Sketchcrawl.  Thank you.
Posted by Maureen at 5:11 AM No comments:

Oberlin and the Art Museum 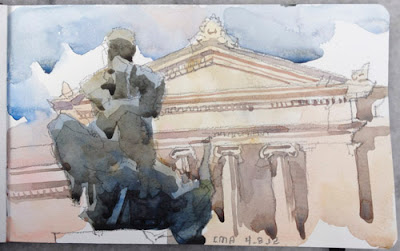 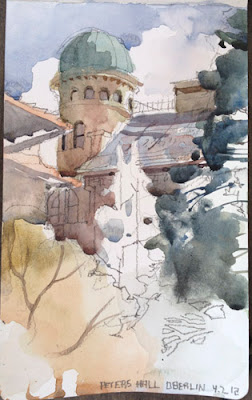 I had some time to kill in Oberlin a couple weekends ago and was ecstatic to find a spot to sketch Peters Hall, which features an observatory of all things! The next day I took some time to paint "The Thinker" which is situated in front of the Art Museum.
Posted by Jeff Suntala at 1:18 PM 1 comment: A recent art-related field trip led us to the Akron Art Museum for the exhibit of "Stranger in Paradise: The Works of Reverend Howard Finster." This sketch is drawn from three of his favorite subjects: himself, Elvis, and George Washington. We had great fun at this exhibit of outsider art, which included a video of Howard's appearance on the Johnny Carson show!


Via Flickr:
A sketch of the Reverend Howard Finster's characterizations of himself, Elvis, and George Washington as seen at the Akron Art Museum.

Posted by Cathy Anson at 8:41 AM No comments: 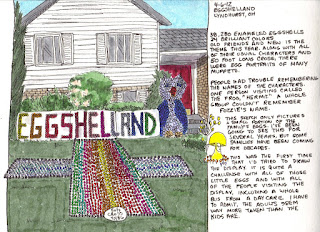 It was a chilly morning, and a few hearty souls gathered at Eggshelland. I lasted about 40 minutes, before I had to head back to my car and crank up the heat. It was a good day to sketch, otherwise, though. No snow, right?

We had to strike to capture the Eggshelland display, though, because it's only up for about 2 weeks. This year's theme, which is not evident from the sketch, was Old Friends and New. There were several clusters of characters. The first was the critics from the Muppets, and then a cluster that had Miss Piggy, Fozzi, Gonzo, Kermit, Beaker, and Animal, and the last new cluster was Mario and Luigi of Nintendo fame.

Several of their yearly characters, a chick, bunny, and such, were laying on the ground instead of propped up by the big tree. They looked a little weathered, probably from the severe wind we'd had. The only one standing up was the owl that you see in my sketch.
Posted by Maureen at 6:13 PM No comments:

Grays Armory is a great piece of Cleveland history. Built in 1893, this sandstone castle was the headquarters for the Cleveland Grays. The hometown militia was the first Cleveland group to leave to fight in the Civil War. Downstairs is a firing range and upstairs is a bar/former speakeasy. It's located near E.14th and Prospect on Bolivar.
Really interesting place to sketch! 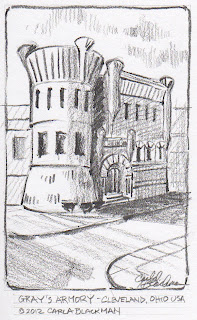 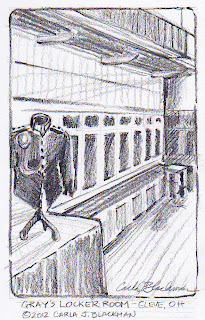 Posted by Carla Blackman at 12:27 PM No comments: